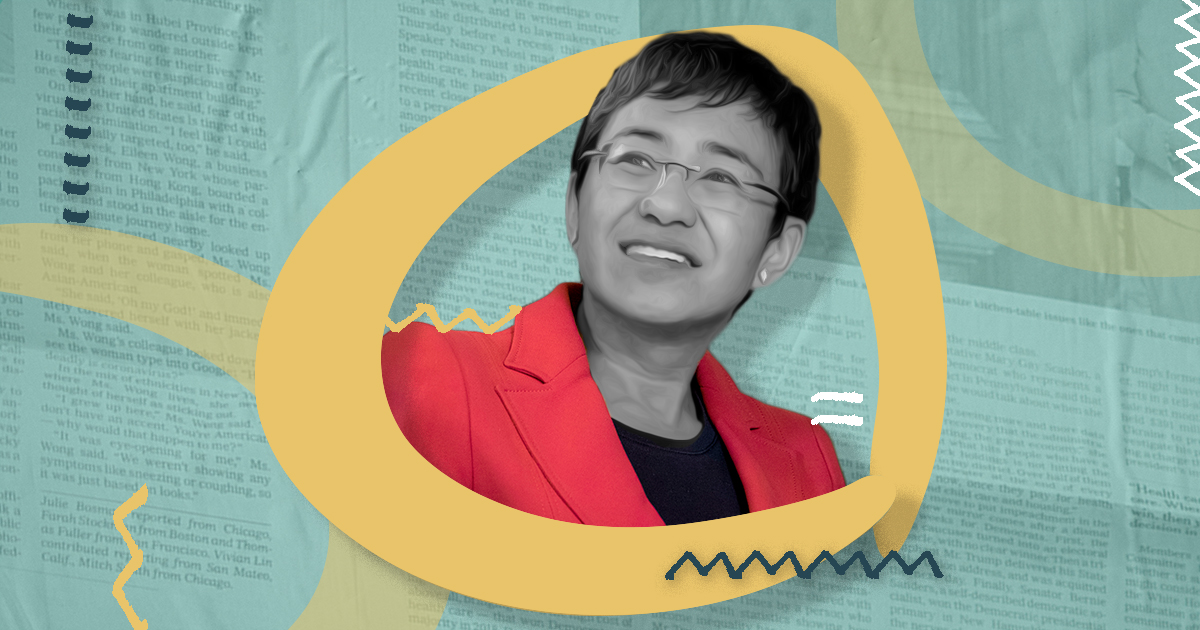 On September 15, 2020, World Press Freedom Canada, in partnership with the Canadian Commission for UNESCO, hosted the webinar Growing Threats to Media Freedom: Democracy Under Assault. The keynote address below was delivered by Maria Ressa, co-founder, Executive Editor and CEO of Rappler. Her moving address includes calls to action for readers to educate themselves and demand accountability from social media platforms and governments. For a video of the keynote and consequent panel, visit https://worldpressfreedomcanada.ca/growing-threats-to-media-freedom-democracy-under-assault/

On June 15, 2020, I sat in a decrepit, windowless courtroom and listened to Judge Rainelda Estacio-Montesa deliver her verdict — what some later called “a shit sandwich” — it starts with a fundamental truth about press freedom, then twists it upside down to justify her guilty verdict, then closes with a quote from Nelson Mandela. It took a lot of legal acrobatics to get me and Rappler here, and it will impact Filipinos: the statute of limitations for libel was changed from 1 year to 12 years (and when we appealed, to 15 years); and a new definition of “re-publication” was introduced.

I was convicted for a crime that didn’t exist when we published a story 8 years ago, for a story that I didn’t write, edit, or supervise. Oh, and while my former colleague Rey Santos, Jr. and I were found guilty, Rappler was declared innocent. Kafkaesque.

Of course, I’m challenging this verdict because I have done nothing wrong.

I’m a journalist, not a criminal. Yet, this is what it takes to try to hold power to account today.

I know first-hand why and how democracy is dying, and why journalists at the frontlines are constantly under attack. Part of it is because I have a front-row seat: as a target, I see the evolution of the online attacks as well as the weaponization of the law; as a digital journalist, I’m faced with near daily decisions challenging our profession; and, as a business and technology head, I’m watching our business model destroyed by technology, and trying to reimagine and build the future of news.

There are three developments that are turning our world upside down:

Why the Philippines? The joke here is that the Philippines spent 300 years in a convent and 50 years in Hollywood: 300 years colonized by Spain, 50 years under the United States. We are Asia’s largest Catholic nation, our 110 million people speak English, and for 5 years now, Filipinos have spent the most time on social media globally: 100% of all Filipinos on the internet are on Facebook. Facebook is our internet.

Cambridge Analytica whistleblower Christopher Wylie called us the “petri dish” where tactics of mass manipulation were tested, and if they worked, the tactics were “ported” over to the West. That made sense from the data: Americans had the most compromised Facebook accounts. The Philippines was second.

We were the guinea pigs. You were the targets.

At the end of 2016, I warned that what’s happening in the Philippines is coming soon to a democracy near you: the brutal killings by law enforcers enabled by the exponential hate pumping through social media targeting journalists, human rights activists, and opposition politicians both online and in the real world.

Our dystopian present is your future. I wish I had been wrong.

So let’s go to the pandemic, which like in most countries only exacerbated the underlying problems. The Philippines now has the world’s longest lockdown: we’re entering our 26th week of a largely security-led response to this virus. Like Bolsonaro in Brazil, President Duterte appointed retired military generals to lead our response. Our lockdowns have an 8pm curfew, and at the most extreme, each home was given one quarantine pass. When you break these rules, you get arrested or shot — more than 100,000 people were arrested for quarantine violations.

On April 1, President Duterte warned Filipinos to follow the rules, and told police to “shoot them dead” if they violated quarantine. Which happened to a 63-year-old farmer who was stopped at a checkpoint for not wearing a mask. The police report said he was drunk and attacked the police, who shot and killed the farmer.

The Duterte administration asked for and received broad emergency powers and a lot of money from Congress twice. Yet, it has little to show for it in terms of the basics: tests, contact tracing, and aid for our people.

Instead, it used the lockdown to consolidate power, and with a captured legislature, to further constrict our rights guaranteed by the Philippine constitution. On May 5, a small regulatory agency ordered our largest broadcaster, ABS-CBN, to shut down. Within a few hours, the network went dark. The last time that happened was when Ferdinand Marcos declared martial law in 1972; that shutdown lasted 14 years.

Shortly after, a working committee in our House of Representatives took away ABS-CBN’s franchise for good. While it took months to do that, Congress passed a draconian anti-terror bill in about five days during the lockdown. President Duterte signed it into law shortly after.

Under this, anyone labeled a “terrorist” by a small group of cabinet secretaries can be arrested without a warrant and held in prison for up to 24 days. At least 34 petitions have now been filed at the Supreme Court demanding it be declared unconstitutional. Still, it achieves its purpose: to make Filipinos afraid to speak and challenge power.

What has enabled our democracy’s death by a thousand cuts?

Technology, once an enabler, is now the destroyer, building division, “us against them” thinking, into the design of social media platforms. It’s not a coincidence that divisive leaders perform best on social media.

Propaganda has always been around, but personalized, atomized, individual news feeds tailored to each person’s weakness, this is brand new.

Social media are the new gatekeepers NOT protecting the public sphere. Facebook is now the world’s largest distributor of news. Except there’s a catch: lies laced with anger and hate spread faster and further than the boring facts of news. They create a bandwagon effect of artificial consensus — for the lie.

You say a lie a million times, it becomes a fact. Without facts, you can’t have truth. Without truth, you can’t have trust. Without these, democracy as we know it is dead. All around the world, populist digital authoritarians use this scorched earth policy to get elected, then they use the formal powers of their posts — the tools of democracy — to cave institutions in from within. Then they use both social media and their top down power to attack the truth-tellers.

I know this first-hand: in 2016, we challenged the impunity of Duterte’s drug war, which human rights groups say has killed tens of thousands (while the government keeps rolling back the numbers), and the impunity of Facebook, which allowed the exponential attacks and hate speech against journalists like me. That was when I was deluged with about 90 hate messages per hour.

It’s meant to pound me to silence. Simultaneously, this astroturfing — a fake bandwagon effect — is meant to influence others to believe the lies. Then it went a step further, using microtargeting to seed false narratives. Look at the last 4 years.

In 2016, pro-government accounts seeded “journalist = criminal” referring to me and Rappler. I laughed then: by 2021, I would have been a journalist for 35 years, and I have a public track record. Yet, I watched that lie repeated a million times make many Filipinos believe that ridiculous charge.

In 2017, that same narrative came top-down from the most powerful voice: President Duterte attacked Rappler in his State of the Nation address, and a subpoena followed about a week later.

In 2018, the government weaponized the law and filed 11 cases against me and Rappler.

In 2019, it issued eight arrest warrants against me, eight criminal cases against Rappler, arrested me twice in a five-week period (and detained me overnight) to try to intimidate us to silence. It only fuelled our mission because we now had first-hand knowledge of the abuses of power.

Of course, in 2020, there was the conviction for cyberlibel. You could argue that conviction happened because we stuck to our convictions.

This is how alternative realities are formed. If you don’t know what to believe, then you can’t act. Which gives more power to the person already in power.

So what can you do?

There is no time to waste.

Civil society will need to be vigilant to safeguard US elections, especially since we all know that this manipulation of our behavior is now part of geopolitical power play. Russians targeted Americans in 2016, and continue to do so today. The fracture line they pounded open then? Racial identity. Look at where that is 4 years later.

In the Philippines, President Duterte in 2016 surprised his own foreign service by announcing from Beijing that the Philippines would pivot away from the United States to China… and Russia.

It’s a strange coincidence — or maybe not — that the Philippines’ anti-terror law and Hong Kong’s draconian security law rolled out at about the same time. Those are top-down measures of control, but far more insidious are the influence operations — state-sponsored social media attacks against human rights activists and journalists, robbing citizens of free will and facts.

There’s one crucial question every citizen in a democracy needs to answer.

What are you willing to sacrifice for the truth?

Then go and do it.

Fighting disinformation during a pandemic