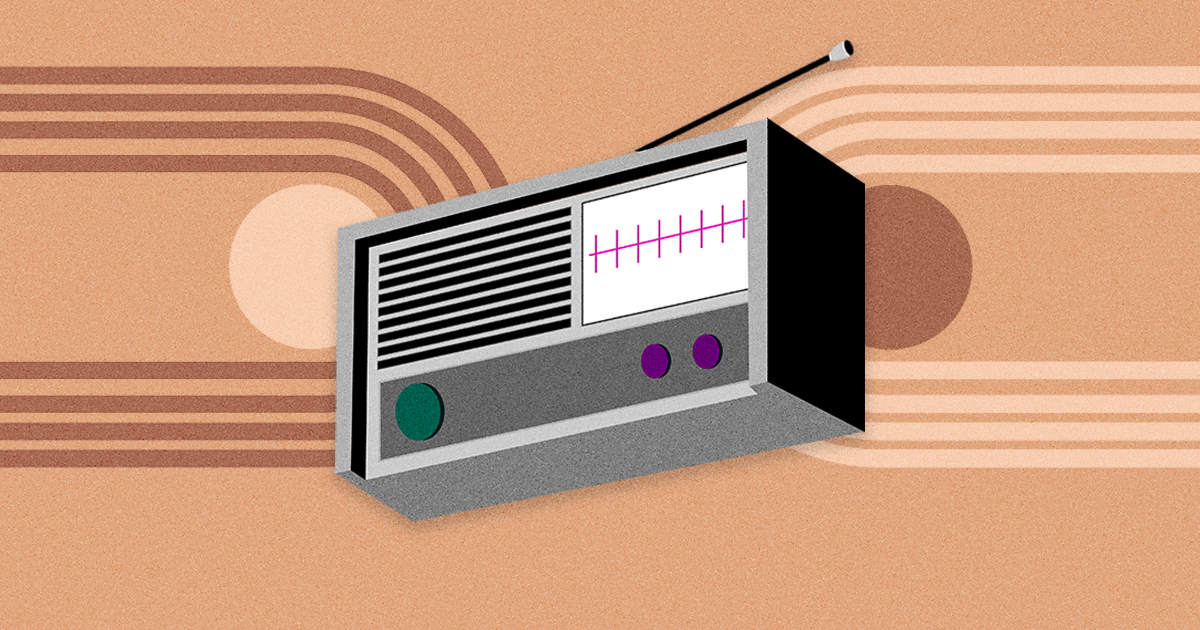 More than 100 years ago, on May 20, 1920, radio broadcasting began in Canada. Repeatedly threatened with extinction since then, community radio has remained undaunted. In fact, it has survived, evolved, developed and been reborn in communities, in associations and on student campuses.

Community radio continues to assert itself in a rapidly changing media landscape and has not been held back by digital advances and a new mass media economy. Quite the opposite: according to a 2017 survey conducted by Nanos Research, some 550,000 Canadians listen to community radio every day.

There are currently around 200 community and campus radio stations in Canada. They belong to the National Campus and Community Radio Association, the Alliance des radios communautaires du Canada, or the Association des radios communautaires du Québec. Whether broadcasting in English, French, Indigenous languages, or other languages, these stations give a voice and airtime to the cultures they represent and come in a variety of shapes and sizes. Some like CJUC-FM in Whitehorse, Yukon, or CHBB-FM in Norris Point, Newfoundland, have minimal annual revenues of around $5,000, whereas others operate on annual revenues of $20–$60,000, with teams of up to 40 volunteers. And at the high end, a typical licensed campus station in a city of more than a million people – generically called City U-FM – operates with a budget of around $600,000 and as many as 265 volunteers.

The strength of its practitioners

Community radio stations could never have survived in this country without the contributions of practitioners, underpaid employees and a slew of volunteers. These volunteers are the X-factor in community broadcasting. Radio stations continue to emerge in a perpetual springtime all over the Canadian and global broadcasting industry, even in the face of economic challenges and an acute shortage of resources. This is because their staff are motivated by a deep passion for the medium. They support Canadian culture and other cultures by giving a voice to those who don't have one. They explore fields like literature, theatre, emerging and contemporary music, comics, current affairs, municipal information, international politics, democratic and other social movements, and so on. The men and women of community radio are staunch defenders of a significant part of our social fabric and an alternative media economy.

The challenge of radio digitization

This diversity of approaches and models shows that radio broadcasting can take place anywhere and with very little means. In many countries, radio has successfully integrated new paradigms and broadcasting channels, including those many said would accelerate its decline. While podcasting is still more economical than radio, it lacks the latter’s immediacy. Community radio has rapidly integrated podcasting, streaming, and Facebook Live broadcasts into its broadcast models. This has enabled it to reach both live and time-delayed audiences via radio, social media, podcasts, the web and even television.

This is the case, for example, at CHOQ.ca (in French) in Montreal, The Lot Radio in Brooklyn, New York, and Resonance FM in the United Kingdom. In some cases, community radio is limited to broadcasting from a studio. In others, broadcasters can transmit from their homes or from locales like a balcony in Miami or a club in Moscow. Community and campus talk-radio is adapting to reach its audiences. Public listening evenings have once again become fashionable in niche areas, especially those linked to the radio arts. It’s a bit like the early days of radio when people would gather around a wireless in their living room and listen to a concert or radio show or news from the frontlines of the Second World War.

The medium of radio is still undergoing profound change – at least in some parts of the world. The next 15 years will be decisive. Norway could very well be the shape of things to come. This country recently abandoned FM radio entirely at the national level in favour of DAB (Digital Audio Broadcasting). The United Kingdom was supposed to follow suit but ended up putting off this much-awaited transition until 2032. Few countries, including Canada, have given much thought to the impact that such airwave digitization would have. Canada, and North America as a whole, is unlikely to convert to DAB. While the U.S. military uses DAB, Canada is considering other radio standards such as HD or DRM (Digital Radio Mondiale).

Imagine for a moment that all the radio stations in Canada could be accessed by a single receiver anywhere in the country. This would mean that from Montreal, for instance, you could listen to Moncton, Iqaluit, Vancouver or Ottawa – and it wouldn’t matter what your favourite station was. That possibility is now available in Norway. Indeed, podcasting and livestreaming are not the only new developments that are transforming radio broadcasting models and markets. Other new techniques will bring about even greater changes to radio than podcasting, which is now already well integrated into community radio. These changes are similar to how general-interest television has responded to the advent of specialty television and digital broadcasting.

The media economy is also undergoing profound change. While some radio stations, like their print media counterparts, are suffering from a chronic drop in advertising, others like WKND 99.5, a private Montreal radio station launched in in 2020, and CINB-FM, a New Brunswick community radio station launched in 2019, are stepping into the fray. In fact, new community radio stations are sprouting up without worrying too much about the turmoil that awaits them. According to a 2020 report published by the Canadian Association of Broadcasters (which includes many of the country's private radio stations), 200 Canadian radio stations could eventually go out of business as a result of an estimated $1.06 billion in lost revenue for TV and radio combined. The most vulnerable radio broadcasters would be AM and private independent stations. Nor is the outlook promising for the Community Radio Fund of Canada, which is financed by both private radio revenues and the federal Department of Canadian Heritage's Local Journalism Initiative.

A plurality of voices

As platforms for all-too-often-marginalized sub-cultures and voices as well as unusual topics, content and formats, community radio stations are ideal channels for expressing a wide range of opinions and perspectives. The approaches, aims, and new ideas of its practitioners often make their mark later in traditional media. This aspect is discussed at length in the conference titled “Promoting Pluralism, Amplifying Local Voices: Community Radio in North America,” broadcast on YouTube by the UNESCO Chair on Community Media. Local community radio has certainly contributed to protecting and promoting Indigenous languages and cultures in Canada and played a role in democratic struggles in other parts of the world. For example, the emergence of community radio in Africa has given a voice to disadvantaged villagers in rural areas (in French). Community radio has had a definite impact in democratizing communication, empowering citizens and providing access to development. It also serves as a bulwark against misinformation in the context of the COVID-19 pandemic and political polarization. One such example is Democracy Now, which is produced in the United States and broadcast in several countries, including Canada. All these voices and collective opinions shape public discourse.

Community radio offers its users a place to speak freely and present a different take on local, national and international news – and it certainly fills in gaps that are bound to occur. This is because community, campus or association radio stations are primarily places of expression and creation. The youthfulness of their practitioners and the proximity of their audiences are an undeniable advantage. In addition, it’s quite natural for them to adopt new broadcasting tools and channels since these are often less unwieldy than those associated with FM or digital broadcasting.

The United Nation’s World Radio Day, held annually on February 13, presents radio as a “powerful medium for celebrating humanity in all its diversity,” “a platform for democratic discourse” and “an arena for all voices to speak out, be represented and heard.” And, with few exceptions, it is free of charge, for all audiences. The 60 Secondes Radio project did not choose this date at random to connect with its community.

Challenges and hopes for the sector

Of course, many community radio stations have thrown in the towel. Only a few years ago, the national and international branches of Radio-Canada International (RCI) moved online and off the air and its antennas were taken down after more than 67 years in operation. And in 2020, a new round of cuts to Ici Radio-Canada's international service was announced. What’s more, some community radio stations have lost their frequencies, while others have been reduced to the bare essentials.

However, local, community and association radio on the whole is resisting, improving, and fighting for its survival. Examples abound. For instance, Rutland County Council in the UK is considering starting a community radio station within its jurisdiction, and auto manufacturer Audi installed a hybrid radio selector (DAB, AM, FM and web) in some of its 2020 models.

Many organizations representing local radio stations also remain strong voices for the sector. Of particular note is the National Federation of Community Broadcasters in the United States, whose members include some 300 stations, many in rural areas. The organization gives these stations a voice and intervenes on their behalf, particularly in public policy matters. AMARC International, the global umbrella organization for community radio, is also active in this way. For decades, it has been a force for community, local and association radio stations worldwide, serving 4,000 members and associates in 150 countries. It “contribute[s] to the development of community and participatory radio along with the principles of solidarity and international cooperation” It also supports community radio in countries where democracy is often extremely fragile.

No matter what form it takes, or the analog or digital broadcasting channels it uses, radio remains more relevant than ever. Along with mainstream television, it is still the only broadcast medium that is direct and does not require a digital subscription. However, community radio, like the mass media, is still far from the end of its evolution. We will witness future transformations, just like our forebears who listened to the first Canadian radio program transmitted from the Marconi Wireless Telegraph Company of Canada in Montreal more than 100 years ago. Who would have imagined then what radio has become today? And 100 years from now, our descendants will say the same thing.

For 25 years, Boris Chassagne has worn different hats in the media sector: journalist, director and host. In the 1990s, he founded and directed the Association des créateurs radiophoniques indépendants du Québec and the Éditions du Studio des Lettres. He has been director of 60 Secondes Radio, an international radio art competition, since 2015. He is now a journalist at ICI Médias.

Fighting disinformation during a pandemic