Shining a Light on UNESCO Chairs

It’s a good time to be a UNESCO Chair.

This dynamic network was created 27 years ago to help UNESCO achieve its mandate and mobilize its efforts. The UNESCO Chairs have special significance in Canada because the Canadian Commission for UNESCO helped establish this international network, which now has over 700 Chairs in 116 countries. UNESCO created the Chairs Network with the unique vision of building bridges among universities, civil society, local communities, researchers, and policy-makers. UNESCO encourages inter-sectoral collaboration across the Chairs Network through exchanging knowledge and working together to find solutions to critical global issues.

The 27 UNESCO Chairs in Canada are actively engaged at the heart of the network, and their leadership sets an example for UNESCO and its partners. The Canadian Network is seen as an incubator for excellence and innovation that aims to achieve UNESCO objectives, promote North-South and South-South cooperation, establish new teaching programs, and accomplish effective and exemplary programs and initiatives.

UNESCO Chairs across Québec are receiving financial support from the Fonds de recherche du Québec (FRQ), and one Chair in Montreal just announced an exciting partnership with private firm Sid Lee Architecture. These separate financial sources are generously providing funding to help the Chairs of Québec realize their ambitious mandates. In a landmark agreement, Secretary-General Sébastien Goupil and Chief Scientist of Québec Rémi Quirion have signed a declaration of intent supporting the 16 UNESCO Chairs associated with Québec universities and colleges. For the next 3 years, the Fonds de recherche du Québec will transfer $15,000 to each Chair in the province, marking the first time that dedicated funds have been provided to the collective Chairs of one province.

This initiative will support cutting-edge research in the natural sciences and the social sciences and humanities – specifically in education, culture, and communications – with the goal of finding solutions to society’s pressing issues. As Sébastien Goupil explains, “By supporting the Chairs, the Fonds de recherche du Québec is proving their commitment to the United Nations’ Sustainable Development Goals, which are at the heart of the UNESCO’s priorities and those of its networks.”

In addition to the funds from the FRQ, the UNESCO Chair in Urban Landscape at the University of Montreal, Philippe Poullaouec-Gonidec, received a private donation from Sid Lee Architecture. Dr. Poullaouec-Gonidec is widely recognized as a true leader in excellence and innovation and plays a leading role in the initiatives and activities of the Canadian Chairs Network. His project, WAT-UNESCO, gathers a network of over 20 academic institutions to resolve urban development problems that speak to major social, cultural, and environmental issues. WAT-UNESCO rethinks our cities and urban landscapes, considers ways to achieve the Sustainable Development Goals, and has received international prizes and honours. The private donation from Sid Lee Architecture will allow Dr. Poullaouec-Gonidec to devote his full attention and resources to pursuing his mandate over the next several years.

These financial contributions offer recognition for the UNESCO Chairs’ significant accomplishments and initiatives. Private donations will help talented researchers and their teams, as well as their international partners, to accomplish their goals and will inspire other leaders in the private sector to support the research of UNESCO Chairs across Canada and around the world. The private sector has an essential role to play in helping to find – and fund – solutions to climate change, environmental concerns, urban overdevelopment, population growth, and food security – societal challenges that affect us all. 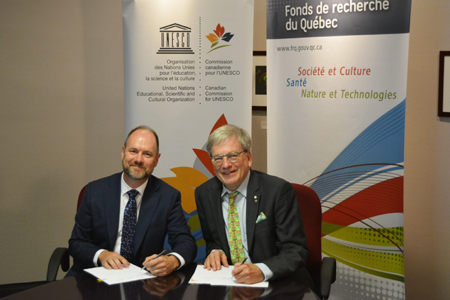 On the left, Sébastien Goupil, Secretary-General of the Canadian Commission for UNESCO, and on the right, Rémi Quirion, Chief Scientist of Québec
Photo: Fonds de recherche du Québec 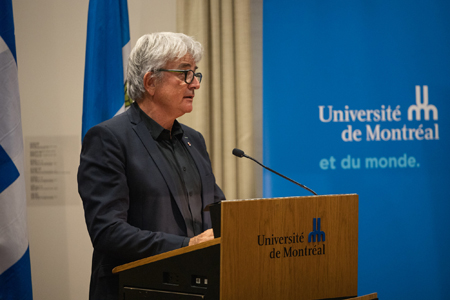